What do you need to know about biking in Amsterdam? 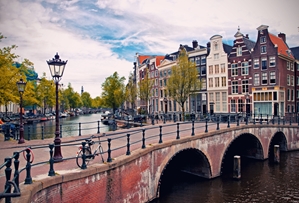 Amsterdam is known for plenty of things - the massive canal system, its history and its famed progressive culture. Scenes of people biking over bridges, down streets and on sidewalks flanking the many waterways are probably also on the list.

This is true not only of locals, but also tourists - biking is a fantastic way not only to stay in shape while travelling, but it's an interesting, fun and unique way to see the city's sights. This is why it's generally a good idea, if given the opportunity and the means, to rent a bike when you're vacationing in the capital city of the Netherlands and go for either a guided or self-navigated tour.

That said, what do you need to know about biking in Amsterdam before you start pumping those pedals?

There are unspoken rules

It shouldn't come as a big surprise that, in a city as bike-friendly as Amsterdam, there are plenty of unwritten rules that everyone should stick to while pedalling around the city. For instance, according to an infographic created by Cheap Flights featured in The Huffington Post, these tips and tricks include remaining in the bike lane as opposed to sidewalks and squares, not stopping in said lanes, keeping to the right unless you're passing, being aware of hand signals and paying attention to traffic even if you have the right of way.

The infographic also pointed out that some of the Dutch bicycle equipment might be different from what you're used to. For example, many Dutch bikes don't have hand brakes, but instead feature back pedal ones. Moreover, you should get used to hooking up lights in the back of the bicycle if you're planning on riding at night, because police enforce the safety laws. On that note, the source noted that it's illegal to drink alcohol and bike, so maybe ditch the bicycle if you're planning on going into town at night and rely on taxis or public transportation instead.

If it's your first time in the city and you're trying to do some sightseeing, it's very important to be aware of your surroundings and realize that this is how people who live in Amsterdam get around regularly. Simply practice being respectful and courteous to other cyclists and motorists. There is sometimes frustration on both sides, but if you obey the rules of the road, there shouldn't be problems.

"Tourists think they're in Disneyland," FietsConsult owner Geert Gelissen told CNN. "And Dutch people think they're God on a bicycle. Customers come into my shop and scream 'arrrrgghh!'"

You're going to want to invest in a lock and make sure you use it. CNN reported that around 55,000 bikes are stolen in Amsterdam every year. Make sure to lock the bike to something secure, however be aware that the authorities can impound bikes that are locked and secured, so do your research. The source of the article mentioned that the best spot to stash it temporarily is a designated cycle park.

It's relatively easy to complain about the rules of the road in the Netherlands - after all, with so many people on bikes, accidents and gaffes are pretty common. That said, this shouldn't dissuade you from renting a bicycle and cruising around the city in this manner. You'll get used to the rules and become one with your gear - and one way to speed this process a bit might be to learn about the history. As The Guardian reported, the main reason for the bicycle revolution in the 1970s was because thousands of people and hundreds of children died in traffic accidents each year in the Dutch capital and massive traffic jams were exceedingly common. This resulted in more public spaces carved out for bicyclists.