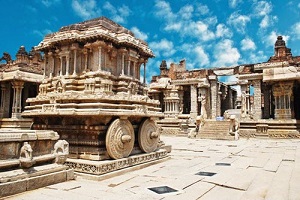 It is easy for Canadian travellers to take their globetrotting capabilities for granted. Why? The nation boasts one of the most powerful travel documents on the planet, according to the Passport Index. With their passports in hand, Canadians can enter 114 countries visa-free and obtain paperwork post arrival for another 50. This state of affairs might make it appear as though Canadian citizens can pretty much go anywhere unencumbered. Unfortunately, this is not the case. Approximately 34 countries require Canadian travellers to acquire visas prior to departure. So before you start mapping out your next overseas journey, make sure to familiarize yourself with some of these more restrictive international destinations.

With an abundant cultural landscape and growing economy, India is quickly transforming into an unmatched tourist destination, the UNWTO reported. Approximately 15 million international visitors entered India over the course of 2017, flocking to popular national landmarks such as the Taj Mahal and exploring the unique cuisines and customs associated with Gujarat, Kerala, Maharashtra, Punjab and Uttar Pradesh regions. Interested in doing the same? You are going to need a visa. As a Canadian citizen, you can take advantage of the Asian superpower's online visa program, according to the Government of India. Consider completing the traditional application process, as the country tends to reward tourists with multiple entry visas, although it is a more involved process.

Researchers for TripAdvisor recently ranked Hanoi, the nation's capital, among the top 20 tourist cities in the world - and for good reason. The metro boasts beautiful public spaces, arresting architecture and world-class food. That said, Hanoi is not the only draw. With scenic coastal and inland regions, Vietnam is a popular destination for lovers of the outdoors, according to Culture Trip. Should you want to follow the lead of the millions of tourists who visit the nation every year, you will first need to get a visa. Like India, Vietnam offers online visas to Canadian travellers.

While getting to each of these overseas spots involves more work than you are used to when travelling internationally, the extra time expenditure and costs are certainly worth the trouble. Of course, you might also consider devoting some of your preparation time to exploring travel insurance, which often proves useful for Canadian travellers jetting off to faraway destinations. Connect with Travel Guard today to view some of our travel insurance plans.