Breaking down the many things that make New England special 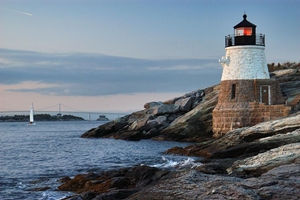 New England is a relatively small place but offers visitors incredible diversity in terms of things to do and places to see. Between rolling mountains, breathtaking natural beauty and quaint neighbourhoods rich with history to modern cities and a spectacular coastline, New England really does have it all.

Made up of six different states, the region is one of the oldest and most unique areas in the United States. Here's a quick breakdown of what to expect during a trip to New England.

Boston, the capital of the state of Massachusetts, is home to some of the most important landmarks in colonial American history alongside art and culture that scream modernity. Boston is the biggest city in New England, and a good place to start your trip.

Relive the birth of the U.S. during a trek down the Freedom Trail, or take in the beauty of Boston's Waterfront on the Harbor Walk. Be sure to stop in the North End for an authentic Italian dinner. Boston Common, the oldest public park in the country, is another great destination. From there, wander through Newbury Street and the Back Bay neighbourhood for some shopping and sight seeing.

To really get a handle on the city though, consider hopping on a Boston "Duck" Tour. The Duck is a W.W.II style amphibious landing vehicle. A guide will bring you through Boston and point out places of interest. If the weather permits, you'll even be able to see the Boston and Cambridge skylines from your Duck as the amphibious vehicle takes to the water.

Beyond Bean Town, there are a number of important sites and things to experience in Massachusetts. Emily Dickinson's childhood home and the Robert Frost trail are just a short drive away from Boston in the town of Amherst. To the south, Cape Cod is a perfect destination for a summer get away.

Located just south of Massachusetts, it is the smallest state in the entire U.S. and when it comes to enjoying the sun and sand, Rhode Island is tough to beat. Though the city of Providence is a great place to spend an afternoon, the Ocean State is all about a trip to the beach.

Newport, Rhode Island is world-famous for its wonderful accommodations and fantastic beaches. As the Huffington Post reported, visitors will be blown away by the impressive mansions and yachts that can be found in Newport. White sandy beaches and delicious seafood are also big time draws.

Just west of Rhode Island, this state also has wonderful beach towns like Westport along with historical and cultural sites to explore. According to Trip Advisor, New Haven, where Yale University is located, is full of spots that will delight visitors of all ages.

Start your day at the Yale University Art Gallery before checking out the Yale Peabody Natural History Museum. For another blast from the past, The Travel Channel suggested stopping in at Louis' Lunch, which may be the birthplace of the modern hamburger, which are still served on a good old fashioned piece of toast.

While Massachusetts, Connecticut and Rhode Island are great for the summer, the northern states in New England come alive in the fall and winter. Vermont is one of the best places in the U.S. to see autumn foliage and also boasts impressive skiing options.

Burlington is just one of many places in Vermont where you can sample organic, local food and take in the welcoming culture of rural New England. For anyone interested in doing some hiking or camping while touring New England, there are plenty of options in the Green Mountain State.

Like Vermont, New Hampshire boasts incredible natural beauty and a chance to reconnect with the great outdoors. Home to moose, black bear and other exciting wildlife, New Hampshire and the other states that make up Northern New England are great for wildlife enthusiasts. The White Mountains are a wonderful place to explore, while areas like Lake Winnipesaukee is perfect for canoeing, kayaking or fishing.

For nightlife, southern New Hampshire is the place to be. Manchester - known by locals as ManchVegas - is home to a number of restaurants and bars that are great for a night on the town.

As the largest state in the region, Maine offers a chance to reconnect with nature, enjoy quaint New England life and kick back on the beach. Affectionately called Vacationland, there really is something for everyone.

Some of the most beautiful beaches in the world are located in Maine, from the sandy shores of places like York to the rocky coastline of Arcadia National Park. This makes the state perfect for a relaxing holiday or fishing trip. In Portland and Augusta, visitors can enjoy an authentic lobster roll or New England clam chowder, while to the north, the untamed forests are great for a weekend in the woods.