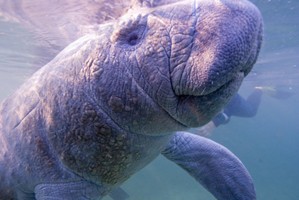 Florida is known for its beautiful beaches, warm, inviting climate and family-friendly attractions. All along the Floridian coast are towns and cities perfect for families and couples alike of all ages. A little further south, however, the tip of the state is home to Everglades National Park, a massive stretch of marsh and wetlands. This environment is unlike any other in the world, and when planning a trip to Florida, taking time to visit the Everglades is perfect for nature lovers and outdoor enthusiasts.

The Everglades are home to a remarkable cast of plants and animals. While some are emblematic of the American South overall, others are unique to the region and found no where else in the world. On your trip, keep an eye out for these fantastic creatures.

According to the U.S. National Park Service, these curious animals are one of the most popular attractions the Everglades has to offer. For those unfamiliar with these docile beasts, they have a plump, friendly face like a walrus with a body more similar to a dolphin. In reality, manatees - and their close relatives the dugongs - share a lineage with elephants, although the two have been on separate evolutionary paths for millions of years.

These lovable animals spend the day floating through the swamps and mangroves of the Everglades, foraging on underwater vegetation. Visitors may catch a glimpse of a group of manatees during an airboat tour.

Once over-hunted for food and for fashion, the American Alligator has made a big recovery and is now widely disseminated across the South East United States. The same cannot be true for some of the alligator's close cousins, two of which are found no where else in the country. Both the spectacled caiman and the American Crocodile call the Everglades home. Both of these species were once found throughout Florida, but due to hunting and human development, now reside almost solely in Everglades National Park.

All three reptiles can grow to impressive lengths and are among the most prolific hunters in the region. That being said, crocodilians are also notoriously good parents and exhibit incredible intelligence.

Unfortunately human activity has threatened the Everglades' delicate ecosystem despite the fact the park is a protected area. Time Magazine reported that the Burmese python, a massive snake native to South East Asia, has been flourishing across the state of Florida, including Everglades National Park.

The prevailing theory is that a small population of these serpents - which can grow to 19 feet in length - were released by pet owners and have since thrived. Like Boa Constrictors, these animals squeeze the life out of prey, and can eat anything from marsh rabbits and birds to young alligators or deer. These animals are indeed impressive creatures, although they do represent a threat to the Everglades.

The National Wildlife Federation found that the most endangered mammal in Everglades National Park is the Florida Panther. Another victim of over-development and hunting, fewer than 100 individuals live in the park, and there may be just 200 animals left in the wild. Because these cats generally preside over large territories, some young males have been reported as far away as Georgia in recent years.

A subspecies of mountain lion, the Florida Panther is an elusive but majestic beast. Like the crocodilians and pythons, the cats prey on the many species of fish, bird and small mammals that call the Everglades home.

Another creature that is an icon of the American south, these curious little creatures are delightfully charismatic. A distant relative of the anteater, the Nine-banded armadillo is the only species that lives in the U.S. It can be found amid the drier forested areas of the Everglades, away from the dangerous alligators or crocodiles that patrol the waterways.

These animals are voracious insectivores, though they will also eat small reptiles or mammals, as well as a bit of vegetation. When threatened, the armadillo can protect itself by rolling into a ball. From there, predators like the Florida panther will struggle to cause any harm to the little critter. When surprised, armadillos sometimes leap into the air before ducking into its trademark protective curl.