4 things you can do at the Great Wall of China 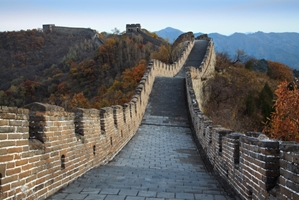 Across the globe, no matter your background or culture, going to the Great Wall of China is on many people's bucket list. Before these individuals "kick the bucket" or simply get to the point where travel is too difficult, they want to explore the massive wall that once marked the end of the Chinese empire and protected the nation against invaders.

So many myths about the barrier exist, from the suggestion that it's the only manmade construct that can be seen from space to the legends that suggest that thousands of workers - if not more - died building it. People want to discover the truth for themselves, and consider seeing the Great Wall one of the pinnacles of Asia travel.

However, others might ask what the big deal is. Sure, it can be considered one of the modern wonders of the world, but it can be argued that it's just a really long wall. It might be cool to see, but once you've taken a glance, isn't that it? The easy answer: No, there are plenty of other things to do at the Great Wall of China.

If you want to sign your name to a massive monument that has withstood the test of time for thousands of years, there's a special place to do so on the Great Wall of China. As The Guardian reported, there's a graffiti portion of the wall at the Mutianyu section where individuals can carve or write whatever they want to.

The newspaper explained that this area was developed so tourists would have a specific place to make their mark. Authorities were worried that rampant and widespread graffiti would end up doing serious damage, so they reined it in to the one spot.

Novices who have never seen the Great Wall of China might not realize that it doesn't just tear through the Chinese countryside and mountains - it extends into the ocean at one point. According to The Huffington Post, it was built into the Bohai Sea at Laolongtou, a place also known as Old Dragon's Head.

Here, there is an area where travellers can play on the sand and enjoy a day at the beach. The source noted, however, that this spot is relatively remote - it's 290 kilometres away from Beijing - though the beach does tend to get crowded early.

3. Get in some exercise

There are many places to hike at the Great Wall, whether travellers want to step off the stony ledges and into the surrounding forests or mountains, or traverse some of the steeper, older and more dilapidated parts of the wall.

However, serious runners might want to start planning an early May trip far in advance. Every year on May 1, The Telegraph reported, fitness fanatics from across the globe gather at the wall to race. There are plenty of different events - a 5k, 10k, half-marathon and full marathon.

It's easy to go it alone and explore the wall and participate in the various activities there, but if you want some more structure, there are plenty of tours available.

The news source detailed some of the local favourites, which includes Wexas Travel's 11-day Essence of China tour. Guests will see the Forbidden City, various parts of the wall, Shanghai and other hot spots. On the other hand, there's the Discover Adventure 10-day trip, during which individuals will cycle 80 kilometres in 6.5 days.