3 exciting things to do in Rio 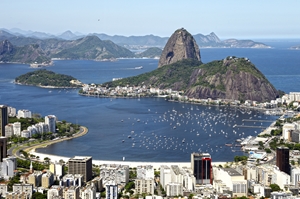 Every so often, a given city or even a whole country has the global spotlight shined on it. The people, the culture, the food and any event going on garners the attention of the world. This can be fantastic for the region involved - it can spur more interest and travel within the area, to the benefit of the community.

This is currently the case with Brazil. The World Cup was held in this South American nation last summer, and the Summer Olympics will be heading to the country in 2016. As such, Rio de Janeiro is currently on the world's stage - people across the globe are watching to see how the large metropolis is going to handle the pressure and showcase itself as a big player.

With improvements being made to the infrastructure and the already warm and vibrant culture out in full force, now might be the best time to head down to Rio and celebrate before the crowds start to gather in full.

So, if you plan to schedule some South American travel this year with Rio at the front and centre, here are some things you should check out while you're there.

Not a forest in the sense you might be thinking, this is actually a protected national park, where the massive Christ the Redeemer is located. TimeOut pointed out that getting to this huge monument can be accomplished in two ways: either making the very tough two-hour hike form Parque Lage or taking a tram from Cosme Velho. The forest is also considered an Atlantic rainforest and boasts viewpoints of the city from many locations.

The Daily Mail explained that you can hire tour guides or join groups easily, because it's simple to lose your way on the many trails. This forest also offers scenic views of waterfalls, crumbling churches and farmhouses, and a chance to see wild animals.

2. Hit one of the beaches

If Rio is famous for anything, it's the gorgeous beaches. A first-time trip to Brazil wouldn't be complete without a trip to Copacabana or Ipanema, though there are a lot of other places to stretch out and enjoy the sand and surf. That being said, the news source reported that the two often favoured beaches do have some interesting attractions, though they tend to be packed. For instance, Copacabana is dotted with Futvolley pitches, where adventurous travellers can play the sport that's a combination of soccer and volleyball. On the other hand, there's always Ipanema, which boasts shops and bars just a stone's throw from the water's edge.

For a more low-key and less packed atmosphere, the Daily Mail recommended Leblon, which encompasses "the ultimate exclusive Rio experience."

3. Check out the Lapa neighbourhood

There are plenty of neighbourhoods in Rio known for their different, insular cultures and ever-present views of the beach. However, Lapa is one of the top places to be for many reasons. As Touropia reported, the area, also called "Centro," is situated in downtown Rio and is renowned for its nightlife. If you want to dance the night away - either at one of the popular nightclubs or even in the street sometimes during the weekends - you're going to want to explore all that Lapa has to offer.

Travellers can also get great food here, the source offered, and enjoy 19th-century architecture. One of the most sought-after sites in the city - Escadaria Selaron, the mosaic steps connecting Lapa and Santa Teresa, another downtown neighbourhood - is also located in this area.